Andons systems are a crucial feature of lean manufacturing, serving to alert operators and managers about current problems and help automate the flow of information on the manufacturing floor. The Andon system, usually comprised of andon visual display boards as well as several input and output devices, allow workers to alert key decision makers about problems on the production floor so immediately corrective action can be taken.

This improved flow of information can help reduce delays within production and increase the efficiency of a manufacturer’s production process. This article will cover the history of Andon Systems and how they’ve evolved to become an integral part of manufacturing today.

Etymologically speaking, the term Andon stems from the Japanese fixed paper-enclosed lanterns of the Edo era between the early 17th century and the mid 19th century. As such, the idea of using lights to alert others can be dated back generations.

In terms of manufacturing, the use of Andon systems can be dated back to the mid part of the 20th century (around the early post-WW2 years) and is largely accepted to have started in the automotive industries. The commercial concept is one that allows production line employees to suspend production due to quality or safety issues. The innovation is most frequently attributed to William Edwards Deming, an American engineer and management consultant who worked with major Japanese manufacturers throughout the 1950s.

Deming’s speech on Statistical Product Quality Administration, which was delivered at Tokyo’s Hakone Convention Center in August 1950, is deemed one of the most significant moments of the Andon system implementations because it was a new way of thinking about how manufacturers can:

Many of the teachings continue to provide core features of the concept in the modern age. The creation and implementation of Andon Systems into the production process is an extension of the philosophies taught by Deming.

The Andon system initially surfaced within the Toyota Production System, forming a central role of the Jidoka Quality Control. It allowed for non-management staff to stop production due to part shortages, defects, tool malfunctions, and more simply by alerting colleagues to problems through the three coloured lights (green for normal operations, yellow to indicate that changes are needed, and red to indicate production must stop). Given that Andon systems are of the more important elements in Japan’s economic miracle, it’s no surprise that Andons have evolved and exported to countries from around the globe.

The Evolution Of Andon Systems

In his book Toyota Production System: Beyond Large-Scale Production, Taiichi Ohno, creator of the Toyota Production System, identified that the Andon boards ability to show “the location and nature of trouble situations at a glance,” as the key to Andon systems. Even in 2019, this rings true, with systems still performing this basic duty. However, as with most tech-influenced features of the manufacturing processes, Andon Systems have progressed.

Over the years, some of the biggest changes have included:

In addition to the three colour lighting systems, many Andon systems now incorporate audio cues to ensure all members of the team are aware of the issues. Aside from supporting partially sighted workers, it helps engineers and workers who are fixed on their assignments or have their sight impacted by wearable accessories. By covering both the visual and audio elements of notifying users to potential problems, the manufacturing environments become better zones than ever before. 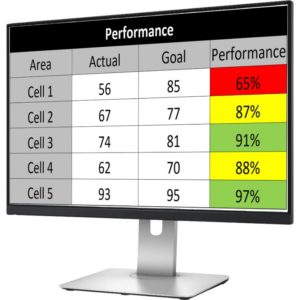 Technology has evolved enabling systems to become far more advanced. This includes becoming tailored to the needs of the individual business. Common features in the modern Andon system includes the integration of Manufacturing Execution System (MES) or Enterprise Resource Planning (ERP) systems, the use of role-based alarms that notify the right person about the specific issue, and the use of reporting to track signals and response times. When used correctly, next gen Andons achieve far more than the traditional lighting systems alone.

Modern Andon systems additionally incorporate Machine Learning and Artificial Intelligence to provide a smooth service that can even alert employees to issues before humans have even noticed the defects. As soon as a machine or piece of equipment becomes faulty, either the technology will correct itself or the people that need to be made aware of the issue will get that info as soon as possible.

For more information about the Andon systems that are available to manufacturers today, checkout VersaCall Andon systems or feel free to give us a call. We’re happy to show you how our Andon systems can improve your production process today.

Get a Free Demo of the Versacall System